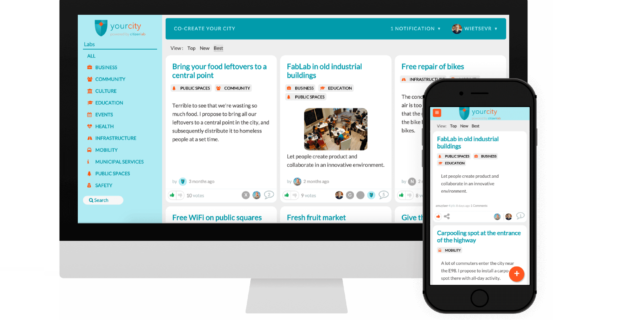 CitizenLab offers local governments a platform for engaging their citizens in local decision-making. It was founded in 2015 by Wietse Van Ransbeeck, Aline Muylaert and Koen Gremmelprez in Brussels, Belgium, while they were still university students disenchanted at the lack of democratic participation in decision-making and place-shaping.

Unlike many digital democracy and participation platforms, CitizenLab is a for-profit company with an embedded and primary social mission. It offers software-as-a-service (SaaS) to governments, charging an annual subscription fee which varies depending on the services and functionalities used and the size of the city. While the cloud-based software, data and visual representation of data is their primary business, CitizenLab also offers toolkits and guides to cities to help make engagement activities a success.

CitizenLab’s rapid growth has been made possible by a number of factors, including its sustainable revenue stream, the variety of skills within the team – including technological and communication skills – and tangible “success stories” to build and maintain citizen engagement.

The CitizenLab platform has been designed with the primary objective of increasing civic engagement making participation easy and fun. Among the basic features of the platform, as its developers describe them, are the following: Figure 1. An example for an automated report. Source: CitizenLab

CitizenLab was first piloted in 2016 in the city of Hasselt, one of Belgium’s most innovative cities. In this pilot implementation, the government involved citizens in developing ideas for the regeneration of the Kapermolen Park. Since then, the platform has grown to being used by over 20 municipalities in Belgium and the Netherlands, and is also being used by the federal government in Denmark and the Flemish and Walloon regional representatives in the Belgian capital.

The City of Liege has launched its city platform based on CitizenLab in March 2017. Citizens can come on the platform from the 8th of March to the 22nd of May to propose ideas to reinvent their city. On one hand, the city has already posted some innovative proposals on the platforms such as implementing a participatory budget or an open data portail for the city in order to consult citizens on these ideas. On the other hand, it is listening to other proposals from citizens.

The city also understands that digital participation can be out of reach for some citizens. To include them in the participation process, it organises “citizen workshops” where they are explained how the platform works so they can post or comment on ideas.

More about how Belgian cities have used CitizenLab here.