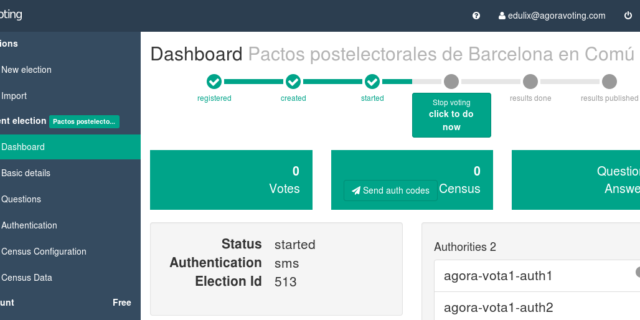 Agora Voting is a secure open source online voting software that protects the privacy of the vote and makes elections end-to-end verifiable. This tool has been developped within the D-CENT (Decentralised Citizens ENgagement Technologies) project, co-funded by the European Commission. D-CENT is a project that brings together citizen-led organizations that have transformed democracy in the past years, and helps them in developing the next generation of open source, distributed and privacy-aware tools for direct democracy and economic development.

Agora Voting allows organizations to carry out secure, flexible and transparent elections online. Votes are encrypted by the voter’s web browser and are kept private from even the election administrators. It has been used  in multiple elections in Spain, including by political parties  such as Podemos to do internal binding elections.

The basic features of Agora Voting are the following:

Some of the use cases of AgoraVoting:

More examples can be found here.