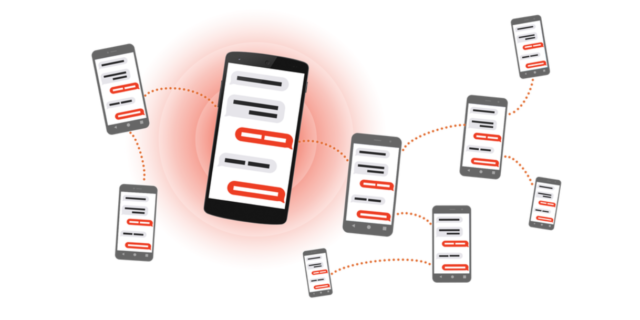 FireChat Alerts uses the MeshKit broadcast technology to spread important news and information to people who cannot be reached otherwise. MeshKit connects smartphone users to each other to download, share, and forward data among users of the app even without Internet. Messages spread from device to device, beyond the reach of cellular connectivity and Internet access points via peer-to-peer WiFi and Bluetooth connections.

Some of the basic features of this application are the following:

FireChat Alerts was introduced during the United Nations World Humanitarian Summit in April 2016. This short video explains how it works.

This application has been used in the following events in the USA.

On June 22, 2016, The Metro Manila Development Authority in the Philippines conducted one of the world’s largest earthquake preparedness initiatives: the MMShakeDrill. Metro Manila is one of the most populated and densest urban areas in the world with 22 million inhabitants. The Shake Drill simulated an earthquake of 7.2 magnitude along the West Valley Fault System that traverses the metropolis. In this scenario, traditional communication networks will become rapidly congested and physical infrastructure will be severely damaged, making the dissemination of critical information extremely challenging and complicating rescue operations.

During and after the Shake Drill, the Metropolitan Manila Development Authority sent alerts to the population across Metro Manila using the broadcast messaging capabilities of MeshKit in FireChat Alerts. At a density of over 700 users/km sq., when only 32% of users receive a message from the servers and cell towers, MeshKit delivered messages to 80% more users. From June 23 to 26, 2016, the Electric Forest Music Festival descended on Rothbury, Michigan. Participants were encouraged to install and use FireChat to communicate in the absence of reliable cellular service. Typically at such festivals, cell coverage is spotty and also overloaded with the number of people trying to connect in one place. However, 82% of Android users of FireChat with MeshKit technology, at the festival received messages through the network daily. At this high a density of over 3,000 users/km sq., phones connect to the mesh an average of 4 times per hour to receive content while offline. Supporters of Democratic nominee Bernie Sanders staged several protests outside the DNC during the convention in July 2016. They used FireChat to communicate and received broadcast alerts using our MeshKit technology. In addition to alerts extending the reach of who could receive messages, the mesh network created an average of 9 connections per hour, per user, while disconnected.