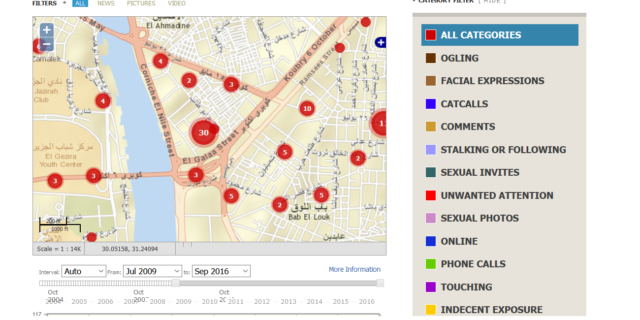 HarassMap is a mobile and online technology non-profit that uses interactive mapping to try to reduce the social acceptability of sexual harassment throughout Egypt. HarassMap was born as a response to the persistent problem of sexual harassment on the streets of Egypt, to which society has become increasingly tolerant. It is the first independent initiative to work on the issue and was co-founded in 2010 by Rebecca Chiao (Project Leader), Engy Ghozlan, Amel Fahmy (Principal investigator of Research Unit) and Sawsan Gad.

HarassMap won the 2011 World Summit Youth Award and the 2012 Deutsche Welle Best of the Blogs Award for ‘Best Use of Technology for Social Good’ and is now an incubated social enterprise at Nahdey El Mahrousa. In 2012, the International Development Research Centre (IDRC) of Canada offered HarassMap a grant to continue study sexual harassment in Egyp.

When someone experiences or is a witness to an incidence of sexual harassment, they can fill out an online report or send the report via SMS, e-mail, Twitter or Facebook including the details of the incident as well as address, street name and public points of interest. HarassMap then verifies the reports and places them on a Google map of Egypt, which localises sexual harassment hotspots.The map will show red dots where incidences of sexual harassment have taken place.

HarassMap volunteers visit the areas where incidences have occurred to raise awareness about what constitutes sexual harassment and to work towards ending it.By meeting with local shop owners, police officers, doormen and other public venues, the HarassMap team is working to mobilize them to make their neighbourhoods “harassment-free zones”.

This application is currently used in Egypt.