ICOS / Applications / 3.City Infrastructure and Utilities / Waste management / Is there sewage in the Chicago River? 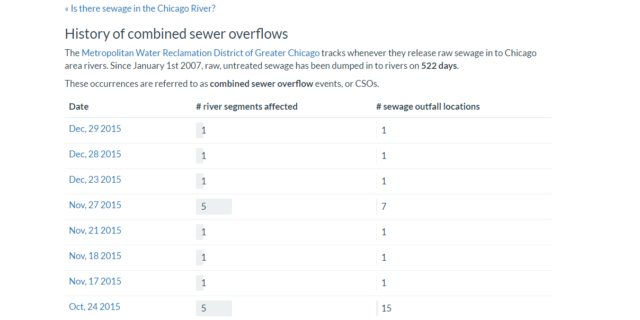 Whenever Chicago gets a lot of rain or there’s a significant snowmelt, the Chicagoland water management agencies must dump excess wastewater into the lake and river in order to prevent flooding. It’s because of practices like these that the city reversed Chicago River’s flow in 1900 to avoid contaminating our drinking supply. As a result, a significant amount of ‘nutrient pollution’ from Chicago travels down the Illinois and Mississippi rivers and collects in the Gulf of Mexico in a dead zone roughly the size of New Hampshire.

The basic features of the platform are:

This website is used by the city of Chicago.