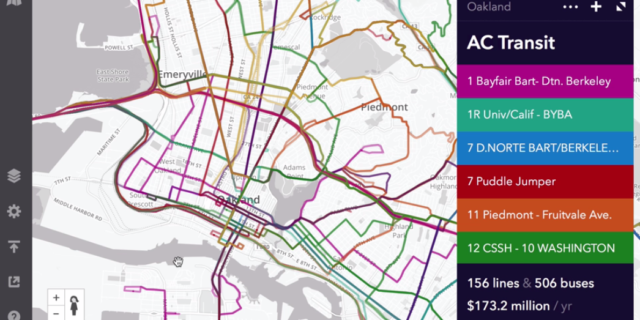 Remix is a planning platform for public transit, usually seen as a video game for planners, which is leading to better public transit service across the country. The startup’s strategy is to empower planners through digital tools, use data as a storytelling tool through visualizations that show how a neighborhood could improve through transit, and promote understanding of data as a mechanism for policy change. As Tiffany Chu, the co-founder of the startup states,

Despite the always-evolving nature of cities and movement of people, agencies don’t often change their transit networks due to the sheer amount of effort involved in planning for those changes, which should never be the limiting factor.

Remix is based in San Francisco and it began as a Code for America project when Chu and cofounders Sam Hashemi, Dan Getelman, and Danny Whalen were fellows, exploring how open data could yield civic tech innovations. After releasing their first tool, a simple, gamified bus route mapper then called Transitmix in 2014, they began working with planners–asking them about the hardest parts of their jobs, and what would alleviate pain points–to improve the software and make it more robust. In essence, they were designing the data visualization tools the planners wanted, but didn’t have.

Part of Remix’s model is based on open-source thinking. The startup uses past successes to inform its strategy plans for new clients so that their process is potentially more streamlined. During the on-boarding process, Remix connects its new clients with past clients so they can share best practices. The idea behind that is that the more information and experience that goes into the platform, the stronger each successive outcome will be.

Remix involves compiling dense, hundred-page reports about a proposed project, which include how much an initiative–like a new bus line–costs, what its benefits are, and what its positive and negative impacts could be. Planners use a mixture of tools like GIS mapping, Excel spreadsheets, Census analysis, and old-fashioned pen, paper, and white boards to compile the information. They present it to the public (community review is usually part of most public transit planning procedures), and eventually request approval and funding from governing bodies, like city councils.

Among the basic functionalities of Remix are: Some recent clients include Honolulu; Miami-Dade County; the Central Ohio Transit Authority; Alameda-Contra Costa County Transit, in Oakland; Torrance, California; San Antonio, Texas; Puerto Rico; Birmingham, Alabama; Detroit; and King County, Washington. Remix has even worked with planners in the Northern Mariana Islands, a U.S. territory in the South Pacific, and Auckland, New Zealand; it’s currently working on plans to build out its international presence due to so many overseas inquiries.