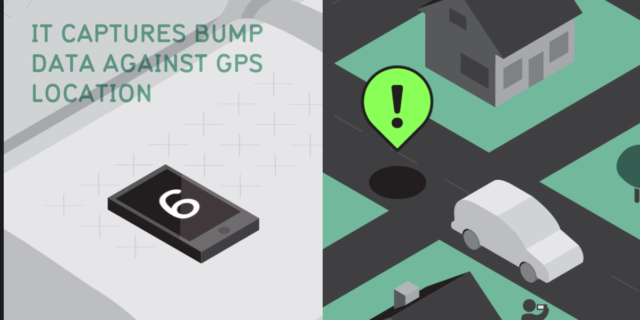 In collaboration with New Urban Mechanics, Connected Bits designed and developed the app, which is freely available so that others can use and build on the project’s efforts. Street Bump won in the ‘Goverment-to-citizen’ local government category from the Digital Government Achievement Awards (DGAA).

Street Bump is a smartphone application used by the residents to record “bumps” which are identified using the device’s accelerometer and located using its GPS. Users have to simply open the app and hit the Record a Trip button and, when the trip ends, hit the End Trip and Upload button to submit the trip.

The collected data is analyzed based on an anomaly detection and decision support system. This system is capable of effectively classifying roadway obstacles into predefined categories using machine learning algorithms, as well as identifying actionable ones in need of immediate attention based on a proposed “anomaly index”. This index permits the prioritization of actionable obstacles. More details about the funcionality of this system can be found in this paper.

This application has been initially developed and used in the city of Boston, but it has been also used informally from other parts of the world, as it can be seen in the screenshot below.