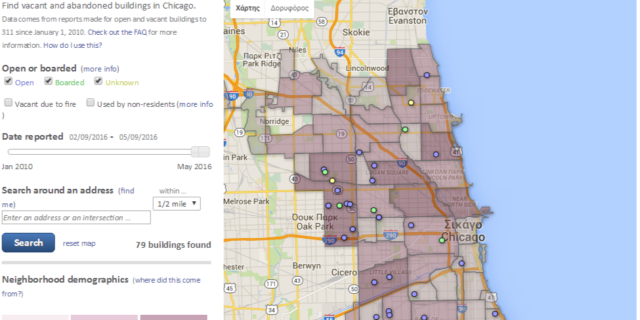 ChicagoBuildings.org is an open data and open source tool for finding vacant and abandoned buildings in relation with some demographic data. Demographics include poverty rate, unemployment rate, population, and median income.The data comes from reports made to the City of Chicago’s 311 reporting service and is updated regularly.

The site is built with Javascript and Google’s Fusion Tables as well as Maps API. The data is stored in Fusion Tables and is updated every week by a PHP script to import the data directly from the City of Chicago Data Portal.

This tool can be useful for any person interested in vacant and abandoned buildings in Chicago. More specifically, it could be used in the following ways:

The website can be used by the City of Chicago, its citizens, and anyone interested in vacant or abandoned buildings in relation with demographics in Chicago.