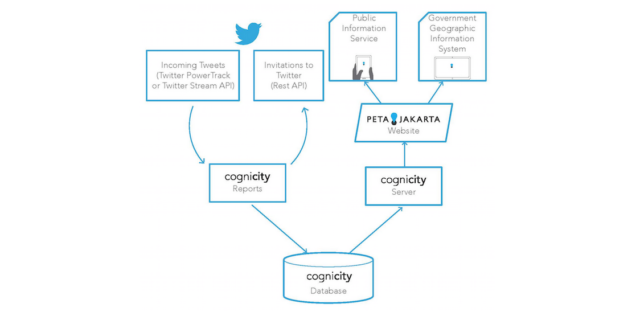 CogniCity harnesses the power of social media by gathering, sorting and displaying real-time situational reports from urgent urban infrastructure issues such as flooding or traffic congestion. It makes this information available in real-time to citizens in need of daily information, and meanwhile conducts predictive analysis to better inform prepare for future planning.

The objective of CogniCity is to remove redundancies in the study and promotion of urban resilience to extreme weather events as a result of climate change; the elimination of redundancies occurs because CogniCity can be used simultaneously to study patterns and practices of resilience among users and government agencies, and to enable more effective sharing of information between citizens, government agencies, and NGOs. CogniCity is a fully developed and tested OSS platform that uses a GeoSocial Intelligence Approach to urban data collection, analysis, and sharing. Such a system has a wide variety of applications for civic co-management as a strategy for adaptation to climate change, not least because the OSS is designed from first principles to be transferable among various domains of application (such as other weather-related hazards, waste management, or crime) and other geographies and languages. This modular approach allows users to pick and choose what parts of the framework they wish to use, while also providing a solid foundation for adding their modules.

CogniCity is written in JavaScript, and uses the PostgreSQL/PostGIS database to store data. The server-side components are written using the NodeJS framework. Data is passed between the server and client device (map) using a RESTFul GeoJSON API.

PetaJakarta.org is the pilot project for the OSS CogniCity, developed at the SMART Infrastructure Facility as an open framework for urban data collection and analysis. It harnesses the power of social media to gather, sort, and display information about flooding for residents in real time. It enables citizens to report the locations of flood events using the social media network Twitter, thereby contributing to a web-based, publicly accessible, real-time map of flood conditions at PetaJakarta.org.